There’s No Place Like Home; Dorothy Was Right About That.

Yay!  I’m home! Three-and-a-half weeks in hospital, one ICP bolt, six pressure changes and one nasty post-operative episode later, I am home.  I love my home so much that it’s very hard to leave it, but even better to return to.

My little house…soooo pleased to be back!

As you will know if you read this blog, I’ve been struggling with bad symptoms for a few months now and the recent stay in the National Hospital was to determine just what was going on (if anything) with my shunt.  I’ll keep it short due to having been in there for weeks; we’ll be here till Christmas if I tell you everything in detail.  I had an ICP monitor placed in my brain on my second day there and that stayed in for three weeks.  An ICP monitor is a probe which sits in the brain and which, when hooked up to a monitor, reads the intracranial pressures every second.  It charts them out as a graph as well so that neurosurgeons can look for any abnormal patterns or pressures.  There is more on ICP monitoring  in a post I’ve nearly finished, with a video of mine being removed for anyone who is facing their first and might be a bit worried about what it all entails. I’ll link to it here once it’s finished in the next couple of days.  Once the bolt is in your head, it looks pretty odd but it’s okay.  Here’s a picture of me totally rockin’ the look.

This time around the pressures were very low to begin with, so Mr Watkins tried increasing the setting on my shunt in stages initially to try and get the pressures to read a bit more ‘normal’.  However..nothing happened.  I was on setting six to begin with and by the time we’d reached setting thirteen, still nothing was happening with the figures on the monitor screen.  The only thing happening was my brain going into a tailspin of pressure every time the shunt was adjusted.  We discovered that increasing the pressure in twos or threes wasn’t doing me any good; my brain clearly doesn’t like being tampered with on any level so we resorted to increasing the pressure just one at a time and giving me a couple of days to recover afterwards before we moved it again, hence the long hospital stay!  When we reached setting fourteen, everything suddenly started to shift and within hours I had high pressure symptoms, which was odd to say the least.  Mr Watkins thought that maybe my brain didn’t need the shunt now as much as I had done before, but that didn’t explain why nothing happened on settings six to thirteen; if my brain was draining partially on its own now, that would surely have been reflected on all the shunt settings, not just number fourteen.  I am now on setting twelve and that is where I have been for two weeks.  The team agreed that I needed to go home and rest my brain, especially after the ICP probe was removed; my head didn’t like that one little bit and I became very ill (which is very rare as I’ve had about eight or nine bolts removed with no problem whatsoever).  Setting twelve is now proving to be too high so tomorrow I am going back to the National to see Simon and have the pressure reduced to setting eleven, to see if that starts to help.  I really want to get back to normal so I’m praying that it does.  So for the last week I have been resting and chilling out in my lovely little home, pleased to arrive back just as the turn of the season is about to commence. 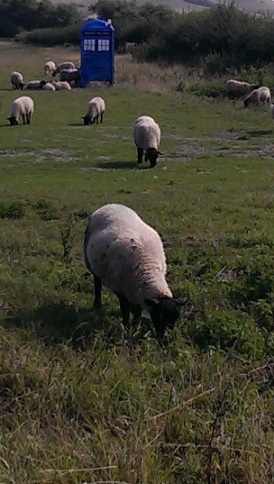 Yes. Sheep and the Tardis in the field next to my home. I don’t get it either.

Autumn is one of my favourite seasons, along with Spring.  The trees are just starting to turn from green to golden browns, reds and oranges and the air is full of the scent of Autumnal bonfires.  The squirrels are back, sourcing their Winter food supplies for their kitchen cupboards and the whole countryside is full of earthy, woody, rainy, smokey scents.  Blissful!

I adore the Winter months; don’t get me wrong, warm sunshine on your skin can feel great but I’m always relieved to leave Summer behind as I can’t tolerate heat too well; my loves are the rainy, foggy, crisp, cold, snowy Winters and the Autumns which proceed it.  Of course, living in the countryside helps fuel my passions!  I get all the glorious scenery and wildlife here too.  My cat, Hoshi, is pleased to have me home and that’s a slight understatement.  I had an excellent cat-sitter staying here for two weeks and the remainder of the time my Mum and a friend stepped in.  A plus point of living in such a gorgeous property in the countryside with a hot tub in the garden is that people are more than happy to come and stay in it whilst feeding the cat. 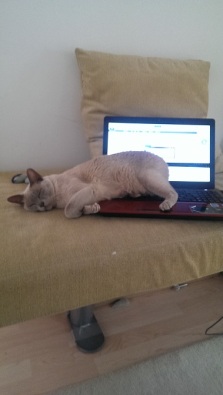 Hoshi. She likes to warm her bum on my laptop for some reason.

I haven’t been able to get Hoshi off me, to the point where I look as though I have grown a furry appendage as she’s constantly lying across my shoulders as I go about my business, looking like some strange furry fashion accessory.  Which purrs.
Two good things happened during my hospital stay which were totally unrelated with my head.  Firstly, Lewis Thorne (the neurosurgeon who is assisting me with my shunt donation project) came to see me on the ward (‘social visit!’ as he put it) and after general how-are-you-and-what’s-happening chat, he told me that he’d sourced some expired shunts in the National that he was putting aside for us to send out.  Hurrah!  From what he said it sounded like there were quite a few of them.  He’s on leave for a bit till early November so once he’s back I can hopefully go and have a look at them and get them out to countries in need.  Hurrah for him.  I also had an email from a donor I’m not allowed to mention because they would rather be kept secret, but it’s from a lovely hospital who also emailed me to say that they have a lot of surgical equipment for use in neurosurgery to give me.  Some UK guidelines have recently been amended so they cannot be used here anymore but they are certain they would be absolutely fine to use in areas lacking in equipment.  I am meeting with the donor tomorrow morning to have a look and pick them all up, then when Lewis is back I’m going to ask him for a little lesson in ‘identifying totally alien neurosurgical utensils’, as I didn’t recognise anything that was mentioned and don’t have a clue what it all does! So…shunts AND surgical equipment!  T’was like Christmas.
The other good thing that happened involved another neurosurgeon.  George Samandouras also works at the National and (I am certain) oversaw a fairly major surgery of mine in 2011 when Mr Watkins was out of the country.  He writes a blog about his work which I stumbled across at the beginning of this year and it was through reading his blog that I became inspired to start this one, to log my shunt donation project and to keep myself motivated.  Mr Samandouras includes amazingly inspiring quotes (his own!) in his blog and I was so impressed by some of them that I wrote a few of them out on Post-It notes and stuck them on my fridge.  One is ‘it’s fascinating how human beings allow our performance to be affected by what other people might think of us! I find this extraordinary’ (this one helped when I worried about being laughed at by senior neurosurgeons who might think I was crazy in trying to stop the disposal of perfectly-useable shunts). The other one (which I still have up) is; ‘you know how they say “good things happen to those who wait”? Rubbish!  Nothing happens to those who wait! Good things happen only to those who take action.’ Brilliant.  Every time I felt myself slacking on my project, I’d read his words and get back to it.  Anyway, having read his blog avidly all year (re-reading it often too), he walked onto my ward the first week I was there.  He was treating a lady opposite me and he came to talk to her.  He was there some time and I went to the bathroom and was thinking about everything I’d gained from reading that blog of his, how he had literally inspired me into action and as a result (hopefully) my dreams of getting unused shunts over to children in need might be realised.  As I came out of the bathroom he was leaving the ward, walking towards me.  I wanted to thank him for writing it, for inspiring me so much…but I became completely and utterly tongue-tied!  Some people get star-struck meeting Madonna or other such celebrities; I become star-struck at the prospect of meeting Mr Samandouras!  I quickly told myself to stop being such a loon and stopped him, introduced myself and thanked him for his blog and his inspiration.

I stand outside the hospital some evenings when it’s calm and quiet; it feels very safe to be here.

He was, as I predicted, totally charming and engaging and seemed genuinely interested in my situation; not that neurosurgeons are not genuine, only I didn’t feel he was just being polite.  I want to link his blog to this one if he would allow it so I’m going to ask his permission first. But in case he’d rather not, I urge you strongly to look him up on Google and read the blog word-for-word.  It doesn’t matter if you’re not interested in brains!  He talks about all manner of things which inspire him, from music to travel to writing with a fountain pen.  I promise you it’ll be time well spent.  The man doesn’t have twenty thousand followers for nothing!  (Update as of 24th October; Mr Samandouras emailed me this morning to say he’d be happy to link his blog to mine and also congratulated me on my ‘very well-written blog’.  I went as red as my hair so it’s a good thing nobody could see it.  Here is a link to his blog: please read and enjoy).
So tomorrow it’s back to the National…today I am feeling pretty rough so I am hoping that the adjustment will take me in the right direction.  There may be no place like home but there is also no place like the National for when you’re feeling brain-weary.

How does it actually feel to have a shunt? – Living with hydrocephalus

What’s it really like to have ICP monitoring? (And…AND!! There’s a video!!)