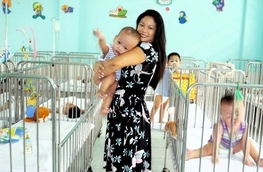 Kim in the ward at Go Vap Orphanage

If you’ve just jumped in, you can read about my Shunt Donation Project (no. 6 on the List) here.

Two days ago I had my first chat with Kim Nguyen Browne, founder of the Vietnam Volunteer Network (VVN). It was so good to have a talk with her about what could possibly be done to help the children with untreated hydrocephalus over there. The situation there sounds even more desperate than I thought it was and has only made me even more grateful (if that were possible) for the treatment and support I get as a hydrocephalus patient in the UK.   As Vietnam is a communist country, the Go Vap Orphanage is government-run although it is primarily funded by donations.  Currently there are about two hundred and fifty children residing there, over ninety percent of whom are handicapped, either mentally, physically, or both.  As far as shunting patients for hydrocephalus goes, the situation is complex.  VVN has a Medical Manager who contacts shunt donors and medical companies for any free material they can offer.  Medtronic, a manufacturer of shunts used for hydrocephalus treatment, recently donated ten shunts to the orphanage.  However, only two of those have been used. The window of opportunity for operating is very small as it depends upon so many different criteria coming together at the same time to enable it to happen.  Kim explained to me as an example that out of, say, twenty-five children who are assessed and presented as being possible patients for shunts, only about eight are selected to have MRI or CT scans to determine the extent of their problems and whether surgery is possible.  Even then, once the results come in, the actual number which can be operated on is greatly reduced as serious complications are often revealed, such as having only half a brain, too much fluid or too small a brain.  So out of that initial group of twenty-five children, only three or four may be operated on.  The rest are left to die naturally – which can unfortunately take years, as in the case of Hien.  Obviously money – or rather, a severe lack of it – plays a huge role in this.   VVN works with ADM Vietnam, a non-profit organisation funded, again, mainly by generous donations, which helps pay for the surgeries on the orphanage children.  They provide free operations and together with donated shunts, this means that the poorest children, often transported from other hospitals, have at least a chance of survival.  The other problem is that neurosurgeons are thin on the ground and only come out to the orphanage once in a while – which may mean that some children who would have been eligible for surgery may literally miss the boat.  If the window for surgery is missed even by a couple of weeks, it can be too late as operating will then pose so many risks due to an accumulation of too much fluid, that the complications and possibility for a bad outcome are significantly raised – and often in these situations the decision is taken to forgo the surgery.
Kim explained to me that in Vietnam, since the war, there has been a prevalent ‘survival of the fittest’ attitude running like a prominent vein throughout its people.  Surgeons will generally only operate on those they feel will make a significant recovery; the other patients are simply washed, fed and watered, but not medically helped. 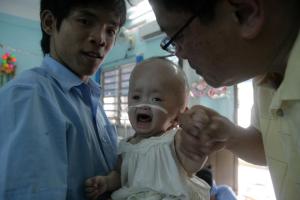 One of the Go Vap babies with pronounced hydrocephalus

Even though these doctors and nurses are efficient at keeping these children clean and fed, they don’t give love; this is given in abundance by the volunteers who spend time with the children, entertaining them, talking and singing to them, giving them massage or simply just sitting by their beds and holding their hands. The stark reality of this being the only love they are likely to receive, having no families, as they slowly die in agony is simply shocking to me in this day and age.  Especially when I saw the wounds recently on the head of Hien, shortly before she died in March.  The link on her name will take you to a video of Hien receiving a massage from a volunteer some years ago.  I may post the photos of her wounds and of her deteriorated state up soon – with a warning first as they are horrible to see – as it is Hien’s story and that of the Go Vap Orphanage which motivated me to act.  Horrible though the images are, they kind of keep me focused on trying to get this situation improved.  I am only relieved to know that this little girl doesn’t have to suffer so badly any more.
So today I am speaking to a neurosurgeon from Alderhey children’s hospital who has kindly agreed to speak to me regarding shunt donation possibilities.  I am sending emails to various neurosurgeons today with some of the information which Kim gave me, to follow up next week once they’ve (hopefully) had a chance to read them.  At this stage I’m hoping just to get a good idea of those hospitals which may be able to donate shunts and also to guage which, if any, neurosurgeons might be interested in taking a look at these scans of the children who are deemed as being ‘inoperable’.  As the hydrocephalus has been caused by chemicals in the food chain, surgeons in this country are unlikely to have seen some of the problems arising, such as ‘literally no brain present’.  It could be that in some cases, the expertise we have in this country could be applied to these patients.  We may have solutions here which are not available there.  That’s when I need to start seeing if my F-List: Number Seven is a possibility.  But that door hasn’t opened yet.  I will update when I’ve spoken to the neurosurgeon.  Fingers crossed people!  By the way, if any medical professionals are reading this and have thoughts/ideas/contacts which might be useful, pretty please send them to me!

A Rather Overdue Update

And People Still Really Need Convincing About This?