How does it actually feel to have a shunt? – Living with hydrocephalus

At the time of this ‘going to press’ (ie 7th August), my own shunt has decided to play up so tomorrow I am going to hospital in London to see my surgeon.  I am keeping my fingers crossed for no more surgery – but I think I already know what the outcome is going to be!  My apologies for not having updated this blog for so long and for probably not being able to update it for a while after today.  I hope to resume to normal service shortly!

After having yet another discussion with a fellow shuntee about the odd things we can feel/hear with our shunts, I thought it might help to write about them here, in case newly-shunted people are worried about what they might be experiencing.  I am currently on my third shunt in the thirteen years since my diagnosis and I have had two different types; the Codman Programmable and now a Miethke ProGAV.  Both of them have presented different sensations and sounds once implanted.  Some are quite funny, some are a little unsettling at first but all are easier to deal with once you understand what is causing them.
So what does a shunt look like?
It looks like this: 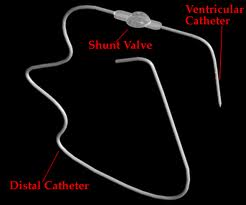 This is a basic model; the valve part (lumpy part) will probably look different depending on what kind of model you have. (picture courtesy of neuroanimations.com).

The ventricular catheter part goes into the brain, where the fluid is, the valve sits under your skin around the rear of your ear (that rhymes!) and the distal catheter is tunnelled down to your peritoneal cavity, in your abdominal area.  It is easy to forget that essentially a shunt is not wanted by the body.  Needed by it, yes; wanted, no.  It is a foreign part and doesn’t sit ‘naturally’ anywhere.  So at times it can feel a bit odd.  The actual procedure to get it in there is quite rough; I’ve seen a couple of shunt surgery videos on YouTube watching them has certainly made me feel grateful for general anaesthetics!  There’s a lot of tunneling, pushing and pulling so you’re going to feel sore afterwards, that’s for sure.  It’s true that some people who have a shunt truly forget that it’s there.  But I am often aware of it and when I’ve put it to my surgeons over the years, it’s been met with varying degrees of scepticism!  Many people don’t feel or hear anything strange at all and that is as normal as noticing the strange stuff.   Everyone is different and the points I’ve listed here have been the most frequently discussed issues on the hydrocephalus forums I’ve been on over the years and the various chats I’ve had with my fellow ward neighbours during my hospital stays.  You honestly probably won’t experience even a couple of them; I’ve just added this list as a ‘just in case’…if you ever start to experience any of these things, you can check back to ensure that you’re not simply going mad.   If you are going mad….well, I can’t help you there!

And that’s all folks!  The good, the middling and the not-so-good-but-rare.  If I think of anything else, I’ll add it on.  However your shunt makes itself known, remember to think of it kindly, even if it’s buzzing/gurgling/feeling tight.  Its keeping you alive, so it’s the best friend you could have.

There’s No Place Like Home; Dorothy Was Right About That.

Living with hydrocephalus: How to have a nice recovery after a nasty surgery (with a little help from your friends)