And People Still Really Need Convincing About This?

THIS POST CONTAINS IMAGES OF UNTREATED HYDROCEPHALUS CASES IN CHILDREN WHICH YOU MAY FIND A BIT UPSETTING SO IT’S UP TO YOU IF YOU READ IT; JUST WANTED TO WARN YOU FIRST!

If you’ve read this blog before, you’ll know that I have hydrocephalus and that I have a shunt which basically, keeps me alive.  You’ll also know that during my surgery-free eighteen months I’ve been working on a project to get shunts sent to countries which are lacking in treatment for hydrocephalus, which is a massive problem and a particularly cruel one as it affects mainly babies and children only; simply because if left untreated, they die before adulthood.  I am currently awaiting surgery next week for my own shunt which is malfunctioning so have been unable to work on this for over a month now but I hope to be back on it soon.  What has become very apparent to me since I started work on this is the restrictions we have placed on ourselves to prevent helping other countries, which is totally ironic seeing as the government seems to pride themselves on providing foreign aid.  Chucking money at a problem doesn’t always solve it, however and in the case of hydrocephalus treatment, there seems to be a real lack of not only money invested in it but actual motivation to do anything about it.  I think it scares health ministries because it’s ‘specialist’; it’s the brain, so it’s scary.  There is a fear in some cultures of such a condition; it’s associated with demons and the child is often abandoned as a result of pure fear on the part of its family.  There are not many neurosurgeons in affected areas – sometimes none at all – and the shunts needed can be very expensive for poor families and poverty-stricken countries.

Go Vap Orphanage looks after hundreds of children like this – shunts need to be donated due to high costs.

Here is where the UK and any other country in the world which has a good hydrocephalus treatment system in place could help.  But I’ve experienced now first-hand the frustrations of not only hospitals and the surgeons in them which want to donate their unused stock to me, but even the shunt manufacturers themselves, due to what are (in my opinion at least) overly-rigorous checks, guidelines to adhere to and restrictions regarding the donation of expired medical products.  I appreciate that we need to be careful.  I would never want to send out equipment which is faulty, which is damaged or which is dangerous in any way and neither would the neurosurgeon who is helping me on this project.  Of course checks need to be made, audits may need to be performed and in some cases, shunts will not be suitable.  But the real problem lies with the guidelines issued by the NHS and the  World Health Organization (WHO).   For instance, point 7 of the WHO Guidelines For Healthcare Equipment Donations reads as follows:  ‘There should be no double standard in quality. If the quality of an item is unacceptable in the donor country, it is also unacceptable as a donation‘.   Expiry dates mean everything.   Once a product is expired in the UK, it cannot be used, in adherence with NHS guidelines.  The product may be perfect.  It may be useable.  There may be absolutely nothing wrong with it.  But try sending that product over to the Congo where there is a dying child desperately in need of a shunt, any shunt, and it’ll be stopped at customs.  Because we wouldn’t use it in the UK.  The fact that we have thousands of brand new, state-of-the-art, shiny shunts available on tap, for free, for anyone who needs one here courtesy of the NHS isn’t taken into consideration in the WHO guidelines.  The countries who need these perfect shunts don’t have another option.  There is no choice, other than certain, slow, agonising death for the child concerned.
Recently The Sun newspaper covered the story of little Roona Begum from India, who had advanced hydrocephalus; you may have read about it.   Two students set up a public campaign to get funding for her surgery, which was performed earlier this year, after pictures of her were circulated widely on the public media.

Roona Begum – a shunt was found for her and surgery was performed.

What I found interesting was reading the many hundreds of comments left by readers under the articles about Roona.  It was clear that many of them didn’t even know this condition existed and were up in arms that nothing had been, up until now, done for her.  It was fantastic that she was able to have the surgery and is – so far – doing well although many thousands still need to be raised for further surgeries; it was never going to be a quick recovery process with hydrocephalus that far advanced.  But the whole story leaves a bad taste in my mouth.  Not that Boona got treated – thank God for her and her family that she did – but that she is just one child.  One child out of thousands and thousands who was lucky enough to have the spotlight shone on her and as a result get help.  This has been going on for years.  There are lots more looking exactly as she did.  Right now, across the world there are children lying in huts, unable to move, hideous sores on the backs of their heads because of it, in pain with no access to medication to ease it, slowly dying.  Just because the media hasn’t covered all their cases doesn’t mean it’s not going on, every day, right this second.

Once my surgery (surgeries?) is/are over, I shall be cracking on with the proposal for the Vietnamese government which I am working on with Lewis Thorne and Kim Nguyen Browne. Kim is working with the Government side and Lewis and I are putting the proposal together; we are aiming to prove once and for all that both economically and ethically it is absolutely not beneficial to continue to leave these children untreated. 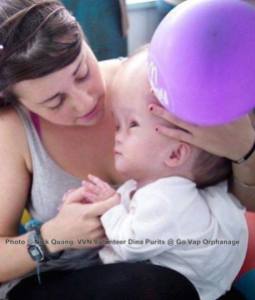 The cost of everyday nursing, clothing, food, medications (if there are any) and accommodation for terminal children until they pass away is huge compared to the comparatively minimal cost of a shunt surgery. And if many of the shunts can be donated, recently expired products from the UK, the US, Canada and Europe which have been passed as safe to use, the cost to these governments receiving them will be even less. If this proposal succeeds, we intend to roll it out to other health ministries and governments in developing countries. But the WHO and the NHS may need to be flexible and introduce a bit of wiggle-room regarding their restrictions on expiry dates. At the end of the day, as long as the products have passed some essential checks to ensure their safety and useability, they should be available for donation. They should not get stopped at customs. Codman UK should NOT be questioned on their ethics for wanting to donate expired shunts; this is what is happening there right now, hence the delay in getting the Bactiseal shunts to Kenya – and these are shunt manufacturers who are being challenged!!  The only ethics that should be questioned are those of the people wanting to place a block on donation and instead send all the good shunts to UK landfill, thus ensuring that hundreds of children across the world will not get the treatment they deserve.
It’s all very well for people-in-suits to sit at their desks here, in their plush offices, after a nice lunch, and make such decisions. If they were out there, if it was their child, if they had no other option, if there was an offer of help in the form of a donated shunt, they’d take it. You can bet your life they’d take it. This picture features at the beginning and end of this post was kindly offered to me by a very talented photographer, Daniel Cima. You can see more of his amazing  work at www.danielcima.com. This image sums up the horror and the pain – both physical and mental – of the children and their families caught up in the nightmare of untreated hydrocephalus.  I couldn’t tear myself away from it when I first laid eyes on it.  As I sit here and look at this image, my own shunt is failing and therefore I’m looking at it with some real understanding of the pain that child is feeling. Lying down is agony.  But I have the reassurance that in a weeks time I will be in hospital and in a couple of weeks I’ll most likely have a new shunt. I have hope. I have a light at the end of the pain tunnel. And God do I feel guilty when I look at that photo. I want to run over there, hand them a shunt and escort them to a surgeon. We have hundreds of shunts here which will not be used. They’ll be thrown away. Please, WHO and NHS, have some sense when we approach you later this year. Sometimes guidelines are helpful and sometimes they spill over into over-cautious and restrictive. Please identify where you need to relax the reins and realise that just because a shunt would not be used here, doesn’t mean that it can not be used elsewhere.  If the picture below cannot convince them that things need to change then I don’t know what else we can do.

I am not a patient patient.